November 11, 2014 – Ribs Within Wins 2nd place overall – Reserve Champion – in the World Food Championship, Las Vegas, NV…is seamed so surreal. What a turn of events in under 8 weeks. It wasn’t easy, but it sure was fun. 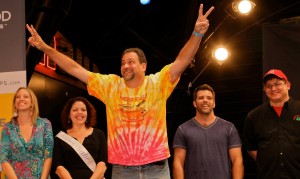 How it all began…One day, near the end of September 2013, I was having a rough day. It was very late and I was tired but couldn’t sleep. I was in a terrible hotel room, it was pouring outside and I was unhappy.

THEN, I got an email saying I had qualified for the Bacon World Championships part of the World Food Championships in Las Vegas in early November. I had never been to Las Vegas before, and I love to cook bacon in competition so it was great. My mood changed immediately. The room still smelled and it was still pouring, but I was smiling for sure.

Over the next 4 weeks, we practiced and did tested out recipe possibilities. We ate at least 25lbs of Wright’s Bacon – the contest sponsor. We used it in so many different ways I can’t remember them all. But we finally honed in on the 2 that we used in the competition itself, then we practiced those a few times to be sure. Finally it was Vegas time.

We packed a cooler of stuff to be sent to Vegas with the BBQ Guru, and we jammed our suitcases full of supplies and clothes. Then we flew out to begin our contest.

More details of the actual contest will follow, but my wife Laura and I rocked the house, and brought home the bacon to prove it.