Upcoming Events
See All
Previous Posts
And How Was Your August? Part 2

So as I left off, August 17-18 was the Hudson Valley Ribfest in New Paltz, NY. I have been doing this contest for 6 years. They have a great NEBS grilling contest on Sat – which I won in 2009 – featuring Pizza and Apple Dessert, and 2 always changing categories. I always score well in both categories. This year was no different. We got a 5th place in Pizza, and a 2nd in Apple Dessert with our apple cookies, down one spot from last years apple Dessert 1st place  - also Apple Cookies. We finished 6th overall. Not bad, but time consuming enough for us to have to hustle to get prepping for the BBQ contest.

It was about 6PM before we started our prep, 2 hours after we should have been finished prepping! But Jonathan and I buckled down and worked. 2 hours, 2 beers, 2 shots of tequila later, we finished our prep. Chicken, Ribs, Pork, and Brisket all looking pretty and ready to RUB – because “You gotta Rub It to Win It”.

We rubbed our meats like we always do. We started our grills on time, and they both locked in right away. We got our big meats in the smokers right on time. They ran all night perfectly. The meats cooked like they wanted to be cooked. Big meats followed the plan, and ribs and then chicken each followed as they should. Jonathan and I were just cruising along until turn in time. Chicken went in first and we thought is was great. Well cooked, flavorful, juicy. we thought we were in the club. Next came ribs and we really struggled to pick the best 6. We chose 7 and sent them off , never knowing how they will score. The Pork was perfect in both texture and taste. It looked beautiful in the box. Finally the brisket was really taste, but I couldn’t figure out which slices to turn in. We chose 7 slices and put in our pieces without even tasting them. And just like that we were done cooking and had to start cleaning up.

Awards came and we were forced to sit in the front because it was shady. They called 10th down to 1st in chicken and Ribs Within was not called. I was very dejected because I thought that was our best product. Ribs were next 10 to 2 and still nothing, and told Jonathan I was going to quit and never cook again. Then they called Ribs Within 1st place Ribs. I jumped out of my seat and screamed really loud. Happiness is the word. I have never won anything but Chicken before, Ribs -WOW. I was psyched, and then they called pork 10-2, again with nothing. Then,  Ribs Within 1st in Pork. Again I jumped and screamed. More like WHOOPED. Finally brisket, and we got 3rd place, and another jump and scream. Wendy, Jonathan, and I all looked at each other thinking -We could win this thing! They called 10 to 3rd overall, and no call – which is good in this case – Reserve Grand Champ…Not Us…and we broke out the jumps and screams one last time, but bigger, as Ribs Within won our first Grand Championship in 6 years and our first fully sanctioned KCBS win. It was truly a great moment. We packed out trophies and rolled home very very happy campers. 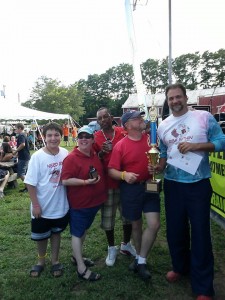 Then 2 days later, it was off to Vancouver for a well deserved vacation with my wife. I will post some pictures in my next post. The salmon was the best ever. Period. and the Oysters…the freakin’ oysters.